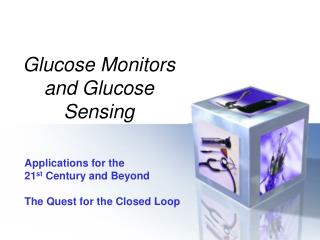 Glucose Monitors and Glucose Sensing. Applications for the 21 st Century and Beyond The Quest for the Closed Loop. Why Glucose Sensing??. More “real time” assessment Ability to detect hypoglycemia and hyperglycemia at “odd” times

Blood Glucose Monitors - . by: matt colletti. what is a blood glucose monitor?. it is a device that measures the level