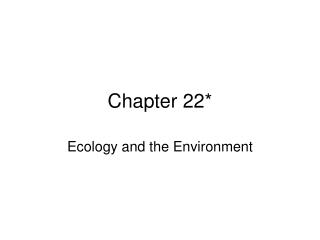 Chapter 22* Ecology and the Environment Environment Ecology – study of relationships between organisms and environment. Factors: Biotic – living Abiotic – nonliving The Organization of Ecological Systems The smallest living unit is the individual organism.

MODULE: PRINCIPLES OF ECOLOGY DIPLOMA I - WILDLIFE TOURISM 2013 MODULE LECTURERS: JK/PG - . ecology is the study of the

An Introduction to Ecology - . 50. key concepts. ecology’s goal is to explain the distribution and abundance of

Chapter 5 : Ecosystems and the Physical Environment - . the atmosphere.