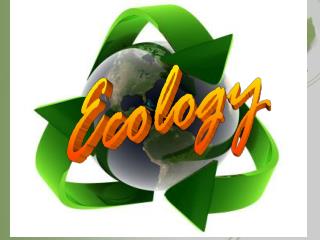 Ecology. Part 1 of 5 The Biosphere: An Introduction to Earth's Diverse Environments. A Mysterious Giant of the Deep. Ecology is the scientific study of the interactions of organisms with their environment The ocean is Earth’s largest and least explored ecosystem

corinthia- net.gr/ecology/axios.htm - Study on the ecological quality of the axios river. www.corinthia-

TOPIC 5: ECOLOGY and EVOLUTION - . 5.1.1. species: a group of organism that can interbreed and produce fertile offspring.

Ecology - . s4l1. students will describe the roles of organisms and the flow of energy within an ecosystem. a. identify

Chapter 52 - . an introduction to ecology and the biosphere. overview: the scope of ecology. ecology is the scientific

Lesson Overview - . 3.1 what is ecology?. think about it. how is earth, in a scientific sense, a “living planet”?.

Ecology - . what is ecology?. ecology is the study of how living things relate to each other and to their environment

Overview: Discovering Ecology - . ecology is the scientific study of the interactions between organisms and the