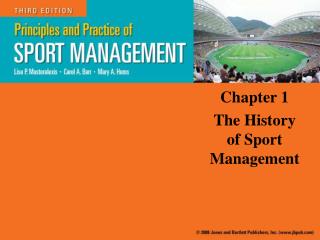 Chapter 1 The History of Sport Management

Chapter 1 The History of Sport Management

Olympic Scholarships Program - . goals and objectives. goals: to contribute to the training of highly qualified

“Is This Sport?” - . for each of the following activities shown, rate whether you perceive it as being a sport, and

Chapter 6 - . sport programs and professions. evidence that sport is a central theme for our culture. 98% of americans

Management Yesterday and Today - . chapter 2. l e a r n i n g o u t l i n e follow this learning outline as you read and

Society, Culture, and Sport - . chapter 20. introduction. we will trace the development of sport, both nationally and