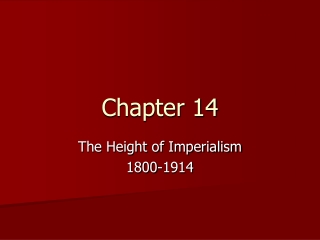 Chapter 14. The Height of Imperialism 1800-1914. Section 1. Colonial Rule in Southeast Asia. European states in 1880s had a fever for overseas territory. What is the extension of a nation ’ s power over other lands known as…. Power is not enough. You always want more. Imperialism. Chapter 14 - . unicast routing protocols: rip, ospf, and bgp. objectives. upon completion you will be able to:.

Chapter 14 - . juvenile justice, probation, and parole. introduction. although the rate of juvenile crime has declined,

Chapter 14. - Chapter 14. from gene to protein. a. b. c. d. e. genes create phenotype. metabolism teaches us about genes.