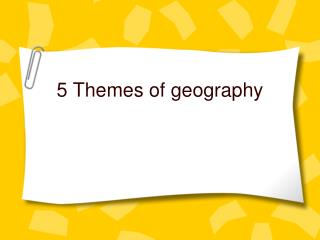 5 Themes of geography. They were created in 1984 by the National Council for Geographic Education and the Association of American Geographers as a way of giving geographers an effective way to categorize and organize geographic information. What are the five themes?. Themes in Purple Hibiscus - . main themes / issues . from oppression to freedom growing up/search for identity the