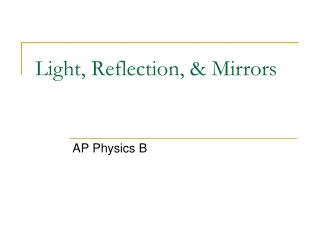 Light Waves and Reflection - . science and technology 3 ms. enright. light is. an electromagnetic wave that is visible to

Light and Reflection - . electromagnetic waves. all em waves are essentially the same. the only difference is frequency

Lesson 1: Reflection and its Importance The Role of Light to Sight The Line of Sight - Chapter 11: reflection and

Chapter 25. The Reflection of Light: Mirrors - . 25.1 wave fronts and rays. a hemispherical view of a sound wave emitted

Reflection of Light - . what is light?. a form of energy travels at a speed of 3 x 10 8 m/s light can either be directly

Reflection of light - mirrors - . behavior of light using mirrors:. rays of light hitting a flat mirror reflect in the

Reflection (Defined) - Reflection (noun) 1. the throwing back by a body or surface of light, heat, or sound without