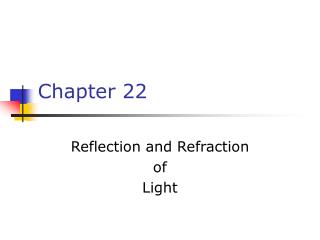 Chapter 22. Reflection and Refraction of Light. A Brief History of Light. 1000 AD It was proposed that light consisted of tiny particles Newton Used this particle model to explain reflection and refraction Huygens 1678 Explained many properties of light by proposing light was wave-like.