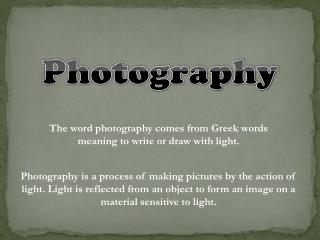 Photography. The word photography comes from Greek words meaning to write or draw with light. . Photography is a process of making pictures by the action of light. Light is reflected from an object to form an image on a material sensitive to light. .

Portrait Photography Services - Do you want a memorable maternity photography in calgary? then rely on diana picek Wedding Photography Packages - A2z weddings offer you a wide range of wedding photography packages in sydney, you can

Photography - . what is a digital camera?. fixed lens or point and shoot. single lens reflex. large format. inside a

Photography - . selection and placement: you got the shot, now get it in the book!. photo process. photo selection -

PHOTOGRAPHY - . journalism. the basic rules of photography. 1. focus on your subject. 2. employ the rule of thirds. 3.

Forensic Photography - . by audrey nelson. education. forensic photographers get into the field the same way any