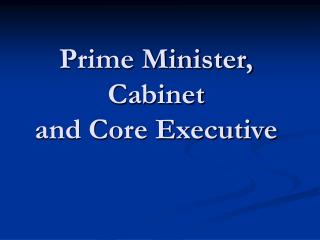 Prime Minister, Cabinet and Core Executive. The Cabinet is the collective decision-making body of Her Majesty's Government in the United Kingdom, Cabinet Ministers are heads of government departments, mostly with the office of "Secretary of State for [ function, e.g. Defence ]".

Prime Minister and the Cabinet - . read and précis chapter 8 of ‘ the essentials of uk politics ’ by andrew heywood.

Course Review: The Federal System and the YCJA - . social studies 9. unit 1: outline. unit 1 focuses on the structure of

GOVERNMENT AND POLICY MAKING - . the rule making function . government and policymaking. policymaking is the pivotal

Theresa May: Britain's new leader - Theresa may was confirmed as the conservatives' leader and will be installed as prime

THE EXECUTIVE BRANCH - . who makes up the executive branch. &amp; the cabinet. who elects the president?. ?. how the

UNIT 5: The President and the Executive Branch - . 1. the executive branch: executing the laws. what is the executive

The Apple Cloud An Executive Summary - . the goal : host as many of our users’ core data and apps as possible to create