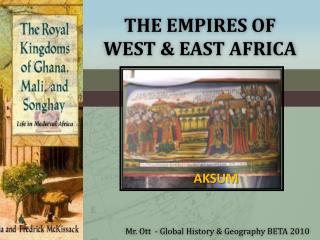 The Empires of West & East Africa

The Empires of West & East Africa

THE MIDDLE EAST: THE CRADLE OF CIVILIZATION, EMPIRES, COLONIALISM &amp; CLIENTAL STATES OF THE WEST

AFRICA - . geography. the prime meridian and the equator run through africa making it the only continent located in all

Making a Russian Empire and Asian Empires - . ap world mr. colden winter 2013 . the steppes and siberia: the making of a