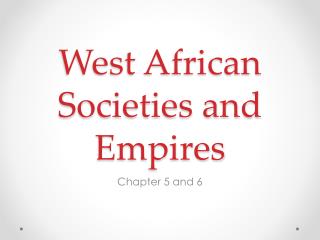 West African Empires - . the empire of ghana 750-1076. political: led by powerful king who ruled over a splendid

Southeast Asia and the West African Empires - . hist 1007 12/2/13. spread of islam. concentration on the coast

African Societies - . what does the word perception mean to you?. by definition, perception is - the process by which

AFRICAN EMPIRES - . an exchange of goods and culture. ghaha empire. in west africa the kingdom of ghana had some of the

Societies and Empires of Africa - . chapter 15. sswh6 the student will describe the diverse characteristics of early