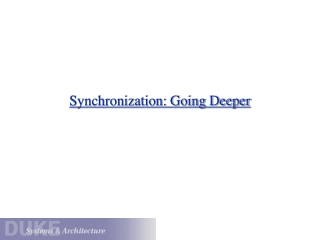 Synchronization: Going Deeper. SharedLock : Reader/Writer Lock. A reader/write lock or SharedLock is a new kind of “lock” that is similar to our old definition: supports Acquire and Release primitives guarantees mutual exclusion when a writer is present

SLEEP AND EEG - Lecture – 14 dr. zahoor ali shaikh. sleep and eeg. sleep. what is sleep ? sleep is a state when person

Sleep and Biological Rhythms - Sarah chollar 11/2/09. sleep and biological rhythms. what is sleep?. sleep as a behavior

CAFFEINE EFFECTS ON SLEEP - . by andrew mcgrath &amp; andrea della libera. does it really effect your sleep?. the

Sleep!!! - . 2/2/11. test your knowledge. demarco has been diagnosed as being in a minimally conscious state. which of

SLEEP - . by dr kamran afzal . learning objectives. at the end of the lecture the student should be able to enumerate