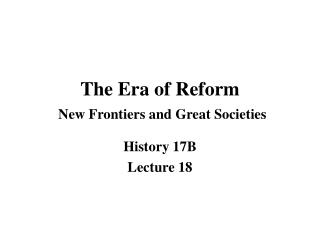 The Era of Reform New Frontiers and Great Societies

The Era of Reform New Frontiers and Great Societies History 17B Lecture 18 Progressive and New Deal Traditions Progressivism has served as the basis for all subsequent American reform movements. Goal: save capitalism from its own excesses. A positive role for government Moderate reform

The Era of Reform New Frontiers and Great Societies

Lecture 9. Reform of Government - . lecture outline. initial evidence of the importance of reform of government for

Essential Question - . what were the important reform movements of the early 1800s?. reforming society. second great

Slavery &amp; Abolition Women &amp; Reform - Examining the life of the “other” in the mid-1800’s. slavery

The Second Great Awakening—Reform in America - . how important is religion in society? what is its role in society?.

The Second Great Awakening and Utopian Societies - . the second great awakening. around 1800 – 1830’s revival of the

The Second Great Awakening - . american reform movements between 1820 and 1860 reflected both optimistic and pessimistic

Reform Movements and Utopian Societies - . questions for today: how did 19 th -century americans seek to improve their