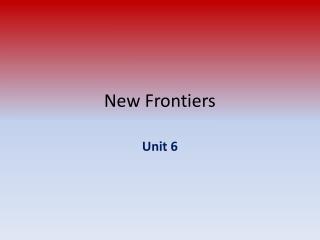 New Frontiers. Unit 6. 1958 Congressional Election . Democrats increase their stronghold in Congress. A Democrat John Fitzgerald Kennedy won another landslide senatorial election in Massachusetts He appeared to be a good choice for the Democratic Nomination for….

Gene Expression new frontiers - . …the processes by which information contained in genes and genomes is decoded by

A peer-reviewed, open-access, journal published by the International Biogeography Society - Frontiers of biogeography. a