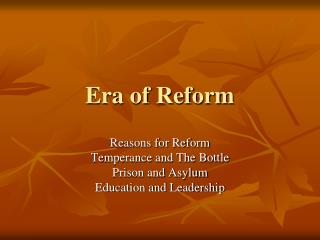 Era of Reform. Reasons for Reform Temperance and The Bottle Prison and Asylum Education and Leadership. The Age of Reform. Reasons: The Great Awakening sparked interest that the individual could control their destiny and that “good deeds” will make the nation a better place An Era of Reform - . chapter 18. i. the spirit of reform. second great awakening revival of religious feeling 1820-1830s

An Era of Reform

APPARTS Reform Era - . prompt. to what extent did the reform movement of that spun off from the second great awakening

The Reform Era - . patrick welsh zachary nixon. second great awakening . what it is

APPARTS Reform Era - . the infant christian by mrs. c. v. r. hale . elizabeth was only five years old. she may be called

PROGRESSIVE ERA REFORM - . today is the last day to turn in your review for credit!!!!. match the following. the goal was

The Era of Progressive Reform - . chapter 13. i. the origins of progressivism. problems in the late 1800s: unemployment,

Ch 18: An Era of Reform - . second great awakening. led by charles finney preachers told people that everyone could go to

Chapter 18 An Era of Reform - . introduction between 1820 and 1850 american reformers devoted themselves to ending

The Progressive Reform Era - . chapter 11. the progressive beliefs. government should… b e accountable to its citizens.