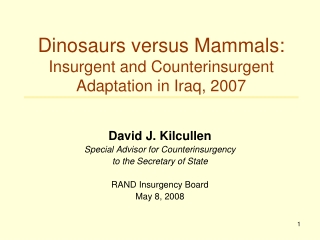 Dinosaurs versus Mammals: Insurgent and Counterinsurgent Adaptation in Iraq, 2007

Dinosaurs versus Mammals: Insurgent and Counterinsurgent Adaptation in Iraq, 2007. David J. Kilcullen Special Advisor for Counterinsurgency to the Secretary of State RAND Insurgency Board May 8, 2008. An unforgiving environment that punishes error.

Dinosaurs versus Mammals: Insurgent and Counterinsurgent Adaptation in Iraq, 2007