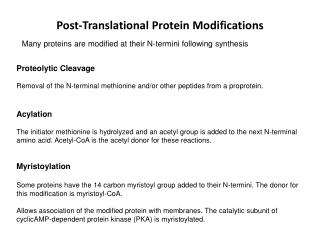 Post-Translational Protein Modifications. Many proteins are modified at their N-termini following synthesis. Proteolytic Cleavage Removal of the N-terminal methionine and/or other peptides from a proprotein . Acylation

THE COMPLEMENT SYSTEM - . help!. complement. a group of sequentially reacting proteins, which upon activation, mediate a

Proteomics - . what is a proteome? proteome characterization proteomic projects use of the proteome. reading: ch 15.2.

Km Measure of binding affinity (roughly) The lower the Km, the tighter the binding Vmax - Maximum rate of enzyme

The role of proteolytic cleavage in the onset of the Chlamydia trachomatis persistence phenotype - . christopher

WHAT ACTUALLY IS BROMELAIN…?? - . mixture of protein digesting enzymes known as proteolytic enzymes or proteases –

The Notch--Secretase Pathway - The notch-?-secretase pathway. notch activation involves the proteolytic cleavage of the