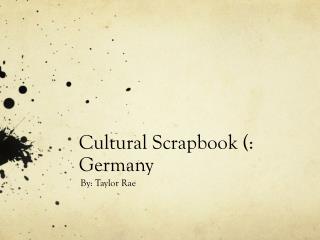 Traditional German Clothing - The german clothing of the years gone by,it is important to understand the concept of

A Family Scrapbook - . replace “a family” with either “the beale family” or “the mcnab family” on each slide

Watch Out for the Chicken Feet in Your Soup - . retold by: angeline, marquis, haley, and conner. original story by: tomie

Cross-Cultural Training Overview: Germany and Brazil - . 27 th april 2011. agenda. introduction of our company and the

My Scrapbook(: - . by: sharlee alcivar . dallas museum of

Cultural Scrapbook-Argentina - . by luciano ramirez. population. the current population of argentina is 40,913,584. the