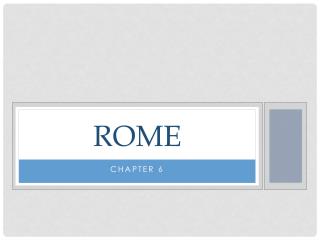 Rome - . myths and legends. begin rome… tomorrow!. chapter 5 quiz will be returned tomorrow 6.1 outline was to be done

Rome - . by conor murphy. founding 1. rome was founded by two twins named romulus and remus . their father was mars (the

Rome: - . from republic to empire. location of rome. italian peninsula ( italy today) centrally located on the

ROME - Roman army. the roman army was one of the few professional fighting forces of the ancient world. the reason they

Rome - . - its location allowed for good trade. geography rome began as a small city-state in italy but ended up ruling

Rome - . 264 – 133 bc. military recruitment. the roman army began like the part-time greek army, with farmers returning

Rome - . unit three: chapter 6 . the founding of rome. legend . romulus and remus, twin sons of a princess and mars were