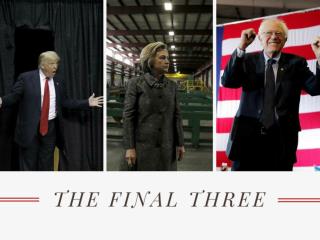 While Donald Trump is the lone Republican candidate standing,
Hillary Clinton and Bernie Sanders continue their battle on the campaign trail. Final Presentation of the Folding Three-Wheeler - . may 17, 2007. recap. remember our pink wheelchair? lots of feedback

STR 581 Capstone Final Examination Part Three - Want to be a straight ‘a’ student? join us and experience it by

the Final... - 1. the final. paper paths the big ideas from the papers we’ve read big pictures how hemoglobin works how

The three fates - . in greek mythology. clotho , lachesis &amp; atropos determine your fate!. according to greek

The Three R’s - . carol johnson, osu school of accounting. challenges in education. could they pass that test you gave

THE THREE BATTLEGROUNDS - Three major arenas of spiritual warfare the mind the church the heavenly places. the three

The Three Estates - . french revolution mini-lesson. the three estates. before the revolution the french people were