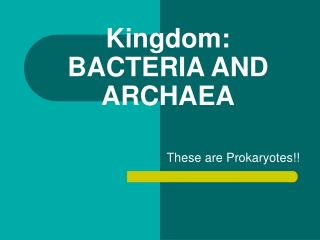 Kingdom: BACTERIA AND ARCHAEA. These are Prokaryotes!!. Bacteria. Bacteria are literally everywhere. Skin, air, door handles, water fountains, ponds, desks, on food, in your intestines, ect Your skin has on average 100,000 bacteria per square centimeter. BACTERIA - . biology chapter 24. bacteria are very small. this is a pore in human skin and the yellow spheres are