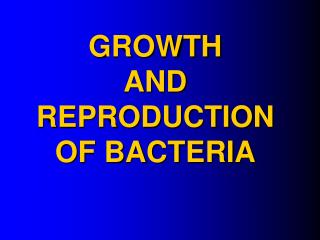 GROWTH AND REPRODUCTION OF BACTERIA

GROWTH AND REPRODUCTION OF BACTERIA. Reproduction of microorganisms. Bacteria multiply by transverse division. Yeasts multiply by budding. Actinomycetes by fragmentation of filaments. Bacterial replication is a coordinated process in which two equivalent daugther cells are produced.

GROWTH AND REPRODUCTION OF BACTERIA

Reproduction of Microorganisms - . sara austin. microorganisms are literally “microscopic organisms”, which can only

Bacteria - . insulin production. use an (restriction) enzyme from bacteria to cut out insulin gene. insert the gene into

Cell Growth and Reproduction - . cell growth and reproduction section 8.2. the cells that make up multicellular organisms

Reproduction in Bacteria - . conditions needed for bacteria to reproduce. bacteria can rapidly reproduce themselves in

Growth and Multiplication of Bacteria - . hugh b. fackrell sept 1997 filename: growth.ppt. requirements for

Cell Division and Reproduction - . cells divide for growth and repair (heal wounds and injuries). the purpose of