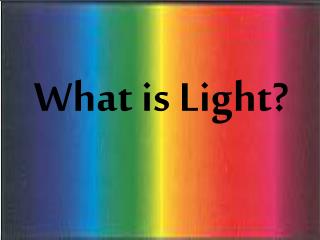 What is Light?. What Is Light?. Energy! Travels like a wave A small packet of light energy is called a Photon. Energy…. Usually needs a medium for transmission. Ex. Heat transfers by convection or conduction. Light Energy…. Travels through the vacuum of outer space….. Polarization of Light: from Basics to Instruments (in less than 100 slides) - . originally by n. manset, cfht, modified