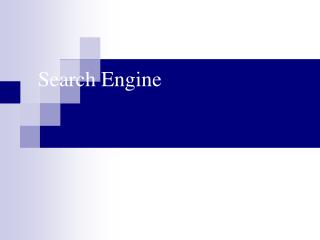 search engine - Importanace of search engine, how they play an important role in developing the searching

Search Engine - . by: eacheon, y a y ing and ian. introduction: what is a search engine?. the web search engine is a

Search Engine Secrets - Exposed by: ivan juarez and ricardo peinado, jr. how to get the best ranking? create site with

Search Engine-Yahoo - . by: israel franco. differences-memory. e-mail - if you did not log-off it remembers your name the