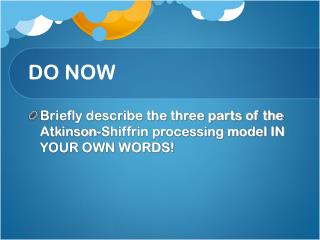 DO NOW. Briefly describe the three parts of the Atkinson-Shiffrin processing model IN YOUR OWN WORDS!. Memory Part II. AP Psychology Ms. Desgrosellier 3.15.2010. MEMORY TEST. Get out a blank piece of paper. DO NOT write down anything while looking at the next list.