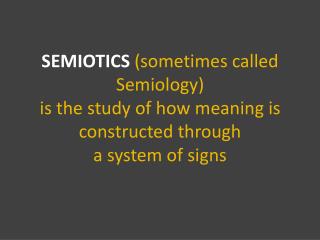 Ferdinand de Saussure during the early part of the 20th Century

SEMIOTICS (sometimes called Semiology) is the study of how meaning is constructed through a system of signs. Ferdinand de Saussure during the early part of the 20th Century. 1950’ s French cultural theorist Roland Barthes.

Ferdinand de Saussure during the early part of the 20th Century

Ferdinand de Saussure - . 1857-1913. course in general linguistics. saussure is credited with being the father of

Sign de Saussure - . linguistic sign unites not a thing and a name, but a concept and a sound image. a sound image is not

Week 4: Semiotics &amp; Theatre - . today we will seek to answer the following questions: w here is meaning made on

Structuralism and semiotics - . advanced english 9. compulsory intro slide. “the test of a first-rate intelligence is

Post-structuralism (from a linguistic and philosophical perspective) i db 493

Roland Barthes - . what is barthes trying to do with

Design Features of Human Language (DF) - . what are the features that we must find in a communication system to call it a

Plugging Your Kids into Nature - Years and years ago, kids played outside during their leisure time. they’d congregate