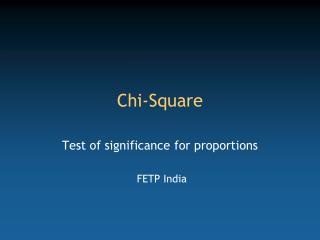 Chi-Square. Test of significance for proportions FETP India. Competency to be gained from this lecture. Test the statistical significance of proportions using the relevant Chi-square test. Key elements. Principles of the Chi-square Comparison of a proportion with an hypothesized value