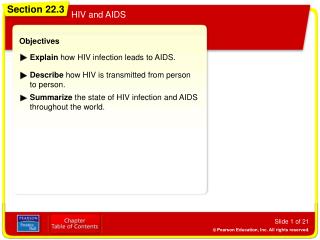 Section 22.3. HIV and AIDS. Objectives. Explain how HIV infection leads to AIDS. Describe how HIV is transmitted from person to person. Summarize the state of HIV infection and AIDS throughout the world. Health Stats What health trend does this graph reveal?.