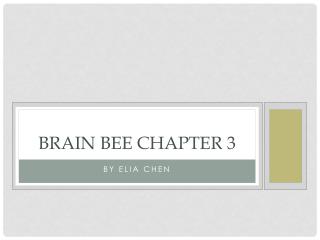 Brain Bee Chapter 3. By Elia Chen. Background. Studies about visual transduction, or how light is converted into electrical signals, comes from studies of Drosophila (fruit flies) and mice V isual processing (how we interpret the light signals) has been mostly studied in monkeys and cats.

Sensation and Perception - . chapter 4. learning objectives. after reading this chapter, you should be able to:. Questions for Chapter 12 Readings - Motivation - . “motivation for listening to rock music”. what are the 3 basic

Sensation and Perception - . chapter 3. sensation vs. perception. sensation the experience of sensory stimulation

CHAPTER 1: WHAT IS LANGUAGE? - . powerpoint by don l. f. nilsen to accompany an introduction to language (8 th or 9 th

Neuroscience and Behavior Chapter 2 - . what’s in this chapter?. what does biology have to do with our behavior?