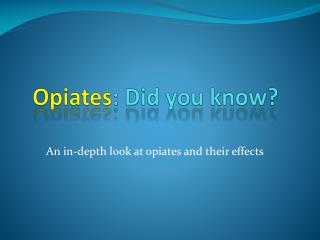 Opiates : Did you know?

Opiates : Did you know?. An in-depth look at opiates and their effects. What is an Opiate?.

Opiates : Did you know?

Overview of Opiate Addiction - . conflict of interest – 2 talks for purdue about dangers of opioid addiction bias –

OPIATES - . what are opiates? any drug derived from opium. one of the oldest drugs used by man. they were used in

DID YOU KNOW? - . january team meeting. did you know…. you are in team meeting when you see these two pictures???. did

The Major Opiates - . most common used drug for relief of pain only true narcotics (stupor, sleep, analgesia) compare to

Did you know? - . the follow vendors have changed names : molecular probes is now invitrogen (4425) ambion is now applied

Opiates - . narcotics. a drug that in therapeutic doses diminishes sensibility, relieves pain, and produces sleep, but in

Did you know... - Did you know. • faeces (poop) smells largely because the microbes in your gut produce two stinky

Did You Know? - . in the manufacture of cheddar cheese, the curd is sliced, turned regularly, and stacked and restacked

Did you know? - . processed foods are the main source of the sodium canadians consume and make up over 70% of average

Opiates - . claire thomas . heroin . heroin can get you high fast and get you hooked fast. and each time you use, it's a

Opiates - . kendell hodgden. defines/describes opiates. referred to as narcotics a group of drugs which are used

DID YOU KNOW? - . facts. approximately 2/3 of teenagers who drink, report that they can purchase their own alcohol one

Opiates - . by: anna jung &amp; tatianna johnson. in the

Opiates : Did you know? - . an in-depth look at opiates and their effects. what is an