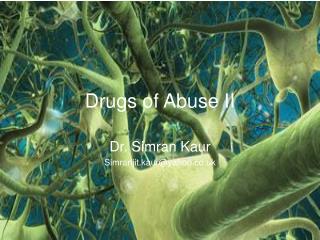 DRUGS OF ABUSE - . cns depressants – drugs that depress the overall functioning of the central nervous system (cns) to

Drugs of Abuse - . fact or fiction . people with low self-esteem are more likely to abuse drugs than people with high

Drugs of Abuse - . yacoub irshaid md, phd, abcp department of pharmacology. drugs of abuse. drugs are abused when they

D-Drugs of Abuse - . this presentation will give a brief introduction and effects on the following drugs of abuse:

drugs of abuse testing - Approved by fda, creative diagnostics now provides the most cost-effective, convenient and

Drugs of Abuse: Psychedelics - . trippin ’ written by jacob. just to be clear…. psychedelics cause perceptual

“ Drugs of Abuse ” notes - . essential question: how do “drugs of abuse” affect the human body and

TOXOLOGY OF DRUGS OF ABUSE - . the terminology used in discussing drug dependence, abuse, and addiction has long been