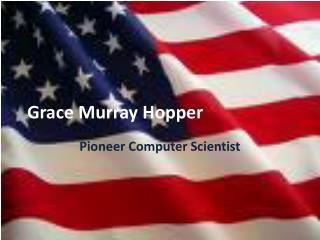 Grace Murray Hopper. Pioneer Computer Scientist. Where it all began…. She was born Grace Brewster Murray on December 9 th , 1906 in New York City. Father Walter was an insurance broker. Mother Mary Van Horne had a love of math. Grace Hopper (1906-1992) - . an influential force and a legendary figure in the development of programming languages the

Inspector Hopper - . spelling. ~ look at each word. ~ find the word that is spelled correctly. ~ spell the word together.

The Space Hopper - . the space hopper bounced into the uk during the. summer of 1971 and children spent hours bouncing up

Amazing Grace - . amazing grace! how sweet the sound that saved a wretch like me. i once was lost but now am found, was