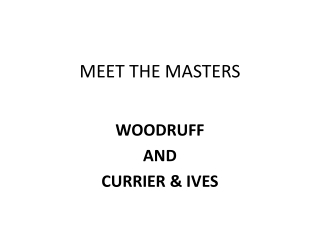 Meet the - . i’m a giant green sea anemone. i look like a green flower. i live attached to a rock. i eat at high tides.

Meet The - . at the. introduction. please hang on a while to learn more about the dutch national research group, what it

“Inspired by the Masters” - . the objective of this project is for the student artist to take inspiration from the

History of the Masters - . by: spencer hunt. history. the masters is held in augusta georgia at augusta national golf