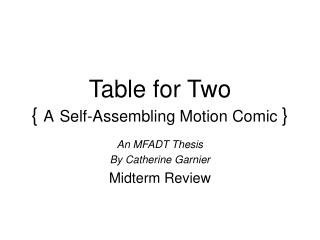 Table for Two { A Self-Assembling Motion Comic } An MFADT Thesis By Catherine Garnier Midterm Review Design Questions Can experimenting with cross-media narrative forms reveal the changing nature of our relationship with storytelling?

Chapter 5 Projectile motion - . 1. recall: a projectile is an object only acted upon by gravity. 2. chapter 4: [linear