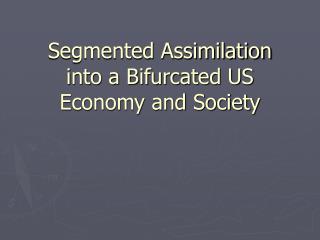 Segmented Assimilation into a Bifurcated US Economy and Society

Segmented Assimilation into a Bifurcated US Economy and Society Traditional Theory of Assimilation The US economy/society allows equal opportunity for those who are poor to become wealthy through hard work and education. Immigrants arrive poor and with less education than their US counterparts.

Segmented Assimilation into a Bifurcated US Economy and Society

Let’s Play! - . all of these topics will be on your test tomorrow, so pay attention!. meiosis: the steps. meiosis

Chapter 8 - Patterns of Inheritance - . chapter 8 genetics and heredity. chapter outline. outline. i. the concept of a

Human Genetics - . understanding genetics with family trees. how do we use mendel’s observations about dominant and