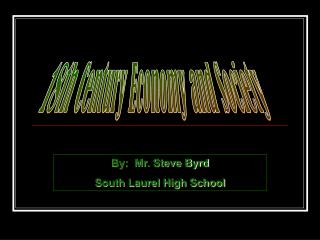 18th Century Economy and Society. By: Mr. Steve Byrd South Laurel High School. The Agricultural Revolution. The State of Agriculture in 1700 1. Peasants and artisans had about the same standard of living as in the Middle Ages 1950s Economy and Society - . objectives. identify the problems of the postwar economy. explain the effects of the

American Society in the 18th Century - . influence of geography isolated by 3000 miles isolated by wilderness largely

Rococo and the 18th Century - Rococo. . the age of enlightenment- reasoning and intellectit continued to be a time of

18th Century - . life in prisons: never cleaned – infested with lice and other parasites . 102 ounces of bread per

Economy and Society - . april 9 – review for final exam. what will be on the exam. readings and documentaries immanuel

18th Century – The Enlightenment - . “the enlightenment is a belief in the ability of the human mind and human