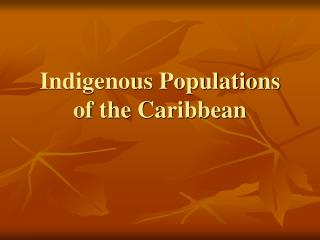 Indigenous Populations of the Caribbean

Indigenous Populations of the Caribbean

Central America &amp; the Caribbean - . chapter 11. ●identify the physical processes that have shaped the landforms

Native Americas Before Columbus - . lecture 2. time on the land. whether we take at face value the common na position

Participation of Youth and Democratic Governance in Latin America and the Caribbean - . afro- peruvian population an

Indigenous Peoples in the Barents cooperation Anna Prakhova - . june, 26-27, 2008, murmansk « the models of cpc: bsr and

Indo- Caribbean Thought - . indigenous perspectives feminist thought. the asians who came to the caribbean as contract

CARIBBEAN STUDIES PAST PAPER REVIEW 2008 (SHORT PAPER) - . on the map of the caribbean below: place the letter “t”