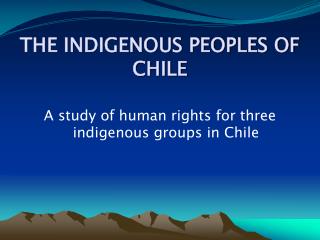 THE INDIGENOUS PEOPLES OF CHILE

THE INDIGENOUS PEOPLES OF CHILE

Chile - . faces of chile. population: 16,284,741 situated south of peru and west of bolivia and argentina, chile fills a

CHILE - . coco. introduction. today, chile is one of the most developed south american countries. and many people come to

Chile - . map of chile. regions weather. north of chile. this is the desert of atacama. it is the most dry place in the

Chile - Blue skies. snow of andes. chile. by: grace williams. blood of the patriots who fought for independence.

Chile - . the capital of chile is santiago wheat, corn, beans, grapes, timber, fish and beef are the common agriculture

Chile - What i saw there. after the 80 countries i visited, my favorite holiday places are http://moraira.site88.net/ and