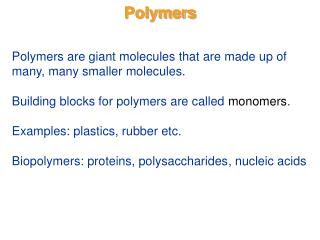 Polymers. Polymers are giant molecules that are made up of many, many smaller molecules. Building blocks for polymers are called monomers . Examples: plastics, rubber etc. Biopolymers: proteins, polysaccharides , nucleic acids. Polymers. Biopolymers:. Proteins.

C2 Properties of materials LO To know how to describe materials and to introduce polymers - . how many reasons can you

Cross-linked Polymers and Rubber Elasticity - . definition. an elastomer is defined as a cross-linked amorphous polymer

Polymers History of Polymers - . a plastic material is one that is easily shaped and takes on a permanent set. the term

Polymer Matrix Composites (PMC) - . reasons for the use of polymeric materials as matrices in composites. i. the

ADSORPTION AT THE SOLID LIQUID INTERFACE - Technological importance of surfactant and polymer adsorption. .