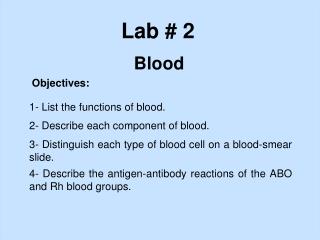 Lab # 2. Blood . Objectives:. 1- List the functions of blood. 2 - Describe each component of blood. 3 - Distinguish each type of blood cell on a blood-smear slide. . 4 - Describe the antigen-antibody reactions of the ABO and Rh blood groups. . -Blood. Objectives and Indicators for MCH Programs - . why discuss mch program objectives? how will you know if you are

THE OBJECTIVES OF FIRMS - The firm’s objectives. the objectives of firms. lesson objectives. appreciate that firms, in

Objectives of Advertising Assignment - . on slides 3 through 12, explain how the advertisement fulfills each of the ad

Objectives and analysis - . module b2, session 14. learning objectives. students should be able to explain some criteria