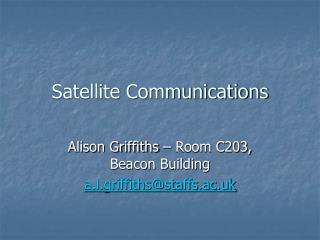 Satellite Communications. Alison Griffiths – Room C203, Beacon Building a.l.griffiths@staffs.ac.uk. MCCS. What we will look at What are satellite phones How do they operate How do they integrate into the PSTN network Who operates this phone network. MCCS.