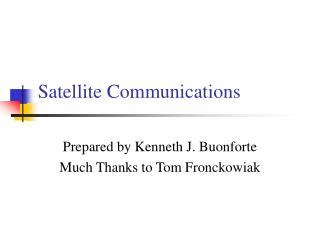 Satellite Communications. Prepared by Kenneth J. Buonforte Much Thanks to Tom Fronckowiak. Differences Between Satellite-Based and Terrestrial Wireless. Satellite-system has greater area of coverage Spacecraft power and allocated bandwidth are limited resources

99.99% Reliable Satellite Connectivity to Anywhere, at Anytime, and Under Any Condition! - . secure transfer and storage

Satellite Communications - . introduction and historical background. what is a satellite?. satellite: in astronomical

Categories of Satellites - . based on functions passive satellite – a communications satellite not equipped with