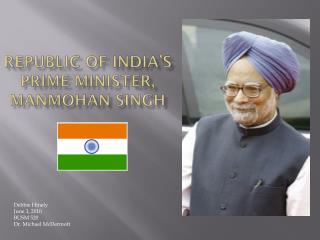 Republic of India’s Prime Minister, Manmohan Singh. Debbie Hinely June 1, 2010 BUSM 520 Dr. Michael McDermott. Why Prime Minister & Not President?. Role of President is merely for ceremonial purposes The real power is with the Prime Minister who has a cabinet of ministers beneath him

http://www.healthyapplechat.com/alpha-prime-elite-reviews/ - Alpha prime elite increases the flow of blood in the body

THE PRIME MINISTER OF INDIA MR. NARENDRA MODI - . narendra damodardas modi is the 15th and current prime minister of

the Indian subcontinent Since 1947: The Legacy of Independence - . border problems. jawarlal nehru. ally of gandhi. 1 st

What is a pronoun? - . pronouns are small words that take the place of a noun. they save repetition and prevent sentences