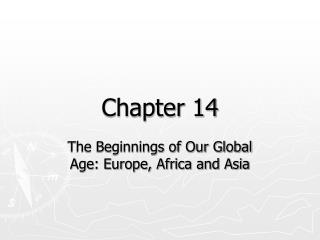 Chapter 14. The Beginnings of Our Global Age: Europe, Africa and Asia. Section 1: The Search for Spices Focus Question: How did the search for spices lead to global exploration? . Prior to 1500 – trade controlled by Arab and Italian merchants Europeans knew they needed direct access to Asia