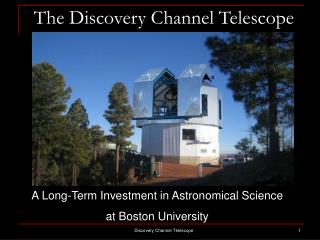 The Discovery Channel Telescope. A Long-Term Investment in Astronomical Science at Boston University. Telescopes as Laboratories. Astronomy is a “passive” science; the experiment is the universe itself, and the telescope is the observational “laboratory”

Galileo’s telescope - . refractor or reflector. refraction. refraction is the bending of light when it passes from one

Telescopes - . why telescopes are important. we have just spent a lot of time talking about light but none of that does

Chapter 7 - . marketing channel strategy and management. in this chapter, you will learn about…. the channel-selection