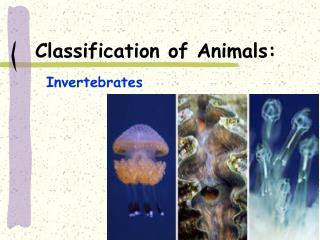 Classification of Animals:. Invertebrates. Invertebrate Animals. 6 th Grade Science. Animal Characteristics. Many-celled organisms sharing similar features and that are made of different kinds of cells. Animal cells have a nucleus and organelles surrounded by a membrane – EUKARYOTIC. Data Mining: Classification and Prediction - . what is classification? what is prediction? issues regarding

Identification and Classification of Sedimentary Rocks - . terrigenous clastic sediments and rocks. no “simple”

Spatial and Temporal Data Mining - . classification and prediction. vasileios megalooikonomou. (based on notes by jiawei

Derivative Classification Training - . note: all classified markings contained within this presentation are for training