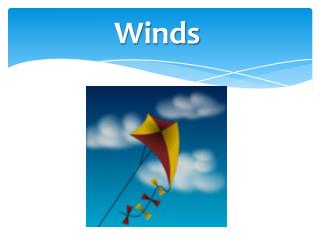 Winds. What is wind?. The movement of air in a horizontal direction. What causes wind?. The uneven heating of the Earth causes differences in air pressure. Why does this happen?. The Sun’s energy is more concentrated at the Equator and spread out more over the poles.

Foehn Winds - . by elena, sarah, stacey and stormy. characteristics. a foehn wind is when a deep layer of prevailing wind

Global and Local Winds - . air pressure differences in air pressure are caused by the uneven heating of earth uneven

Winds - . winds. winds are defined as the horizontal movement of air. winds are named by where they blow from. local

Winds and Deserts - . stanley breeden/drk. deserts. deserts are usually thought of as hot and dry, but there are

Wind - . is harrisonburg, va a good location for wind energy?. wind notes :. air moves from areas of high pressure to

The Prevailing Winds - . wind is the movement of air in the atmosphere wind is one of the most important features of

Global and Local Winds - . i. what causes wind? . a difference in air pressure due to unequal heating of the

Wind - . definition a. wind is the horizontal movement of air from an area of high pressure to an area of low

Wind - . caused by... uneven heating of the earth’s surface winds are named by the direction they blow from. direction

Wind - . wind. the earth is in a constant battle to equalize its temperature it never succeeds, because our planet is