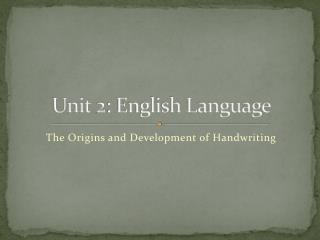 Unit Two English Language - . writing. what three things should you try to identify when you look at the writing

Unit 2 Language - . huang rui. welcome to the unit. guess. how many languages are there in the world? about 2000 about

Unit 2 Language - . reading english and its history. by cang hong. pictograph 象形字. a depiction of a material

Unit 4 English Language 1 - . vocabulary &amp; instructive texts. use of the thesaurus. in a thesaurus you refer to

Unit 2 English Review - . nouns name a person , place , or thing. school. dog. girl. circle all of the nouns in the

English 11: Unit 2 - . quotes. the interesting narrative of the life of olaudah