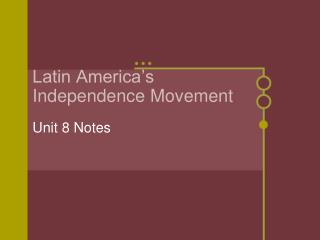 Latin America’s Independence Movement. Unit 8 Notes. Spain Builds An Empire…. Spain conquered most of the lands in the Americas (Portugal = Brazil). divided empire into provinces 2 most important provinces were New Spain and Peru set up a class system; Native Americans were the lowest.

Latin America Beyond Question Review Game - . the amazon river basin is the largest remaining rainforest on earth. this

the Indian subcontinent Since 1947: The Legacy of Independence - . border problems. jawarlal nehru. ally of gandhi. 1 st

SS6H1: The Student will describe the impact of European contact on Latin America - . a. describe the encounter and

Governments OF BRAZIL AND MEXICO - . latin america. standards. ss6cg2 the student will explain the structures of the

AGENDA - . current situation how the idea was born what is despegar.com strategy / business model economic outlook for